POZNYAKIZHILBUD was founded in 1996 by Nver Mkhitaryan and became one of the first private construction companies in Kyiv.
‘Poznyakyzhilbud’ corporation, one of the largest Ukrainian developers, was founded in 1996. The building area of more than 1 million square meters have been built and put in operation during almost twenty years, including the famous red-brick houses: for example, Wave House in Tsarskoye Selo, the Twin Towers in Lesi Ukrainki Boulevard and the house at 17 Kovpaka street.
Arthur Mkhitaryan has dedicated almost ten years to work in the corporation ‘Poznyakyzhilbud’, where he started as an advertising specialist and has made his way up to the General Manager of the business and then, its owner.

The construction company POZNYAKIZHILBUD has become a part of the investment and development company TARYAN Group (owned and run by Arthur Mkhitaryan) since December 2015.

BUILDING FOR A FULL DUE - MEANS TO NEVER ECONOMIZE ON THE IMPORTANT: FROM THE FIRST BRICK TO MANDATORY FIRE LIFT. MATERIALS AND STRUCTURES OF ABSOLUTE QUALITY USED DURING THE CONSTRUCTION OF A BUILDING AND THE TEAM OF HIGH-QUALIFIED PROFESSIONALS PROVIDE THE STANDARDS OF CONSTRUCTION THAT POZNYAKIZHILBUD IS FAMOUS FOR.
IF POZNYAKIZHILBUD IS CONSTRUCTING THE BUILDING, IT WILL BE FINISHED EXACTLY IN TIME. THERE IS NOT A SINGLE LONG-TERM CONSTRUCTION IN THE COMPANY'S PORTFOLIO - AND IT'S NOT ABOUT LUCK BUT ABOUT CONSISTENCY: TODAY, THE COMPANY HAS CONSTRUCTED AND PUT INTO OPERATION MORE THAN ONE MILLION SQUARE METERS OF HOUSING.

IF POZNYAKIZHILBUD IS CONSTRUCTING THE BUILDING, IT WILL BE FINISHED EXACTLY IN TIME. THERE IS NOT A SINGLE LONG-TERM CONSTRUCTION IN THE COMPANY'S PORTFOLIO - AND IT'S NOT ABOUT LUCK BUT ABOUT CONSISTENCY: TODAY, THE COMPANY HAS CONSTRUCTED AND PUT INTO OPERATION MORE THAN ONE MILLION SQUARE METERS OF HOUSING.

WE STRIVE TO ENSURE THAT EACH HOUSE IS A KIND OF ECOSYSTEM WHERE LIVING IS COMFORTABLE AND EASY. THEREFORE ALL PROJECTS OF POZNYAKIZHILBUD COMBINE MAXIMUM FACILITIES AVAILABLE FOR RESIDENTS AND THEIR GUESTS INCLUDING THEIR OWN PARKING, SHOPPING AND ENTERTAINMENT AREAS, SPORT CLUBS AND PLAYGROUNDS FOR CHILDREN.
WE ARE TOTALLY AGAINST ANY BUILDINGS THAT LOOK LIKE FACELESS BOXES. A HOUSE IS NOT JUST A ROOF AND SOME WALLS, IT IS THE DECORATION OF THE CITY, EVEN IF IT IS LOCATED FAR FROM THE CENTER AND IS IN THE AVERAGE PRICE CATEGORY.

WE ARE TOTALLY AGAINST ANY BUILDINGS THAT LOOK LIKE FACELESS BOXES. A HOUSE IS NOT JUST A ROOF AND SOME WALLS, IT IS THE DECORATION OF THE CITY, EVEN IF IT IS LOCATED FAR FROM THE CENTER AND IS IN THE AVERAGE PRICE CATEGORY.

In the late 1980s he and his family moved to Kyiv to study in the post-graduate school in the National University of Construction and Architecture.
Ukraine became the second homeland for Nver Mkhitaryan. In 1996 he founded the construction company POZNYAKIZHILBUD and became its leader. He founded a new direction in the formation of architectural, structural and technological residential housing system. Due to his developments and discoveries POZNYAKIZHILBUD very soon became the leader in the construction of luxury housing market in Ukraine. In December 2015 Never Mkhitaryan transferred the management of POZNYAKIZHILBUD to his son Arthur Mkhitaryan, who had been president of the company before.
Now Nver Mkhitaryan focused on the development of his private international company Emerald Palace Group (specializing in the construction of luxury hotels and resort complexes). EPG portfolio includes Kempinski Hotel & Residences Palm Jumeirah in Dubai.
Nver Mkhitaryan is also the author of more than 150 scientific papers, including 10 monographs and 10 patents. He is the author of new energy saving technologies based on the use of alternative and renewable energy sources.
He was awarded the Order of Prince Yaroslav the Wise of V degree, the Order of Merit of I, II, III degree, Order of Danilo Galitsky. He also has the title of Honored Builder of Ukraine.

POZNYAKIZHILBUD HAS SHOWN ITSELF AS AN INNOVATOR THAT PUTS ACTUAL SCIENTIFIC RESEARCH INTO LIFE.

Back in 1997 a separate “Project Center” was created within the structure of POZNYAKIZHILBUD. The Center fulfills a full range of works on new construction designing, on reconstruction and repair for standard conditions, as well as for the areas with high seismic risks and complex engineering and geological conditions.

Highly experienced professionals in all areas of design: architects, designers, engineers of all necessary specialties work in the Project Center. The employees of the Center have experience of working for famous international companies. They can successfully solve any urban planning, architectural and engineering tasks in the difficult conditions of a modern metropolis.

The company has built a warm home first in Kiev
The first of the construction companies applied in Ukraine cast-frame construction technology in residential construction
The company built the first in Kiev 2-D and 3-level penthouse in residential complexes on the street. Kovpak, 17 and Boulevard. Lesya Ukrainka, 30b
The first was to establish every apartment heating system installed automatic temperature control and door-meters to record consumption of thermal energy, which significantly affected the cost of real estate content
The first to use the new complex curved shape of the roof with overhanging eaves concrete flight of up to 2.5 m in the construction of wave-house on the street. Staronavodnitskaya 13
First Make External elevator to the penthouse in a residential house on the street. Lesya Ukrainka, 23
The first park on the roof of high-rise apartment buildings in Kiev - one of the latest innovations of the company

The experience of building

Based on the experience of building 15 houses Poznyakyzhylbud height of more than 25 floors was designed DBN V.2.2-24: 2009 “Design of high-rise residential and public buildings.”

The Construction Company is certified by all three international standards in Ukraine:
ISO 9001:2008, ISO 14001:2004, OHSAS 18001:2007.
The certification indicates that all construction works are carried out in strict compliance with international quality standards, according to the worldwide standards and requirements in the field of industrial and environmental safety. 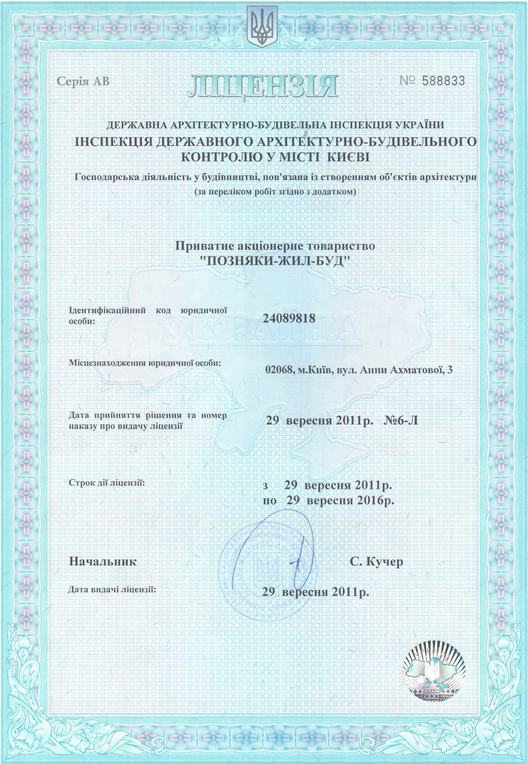 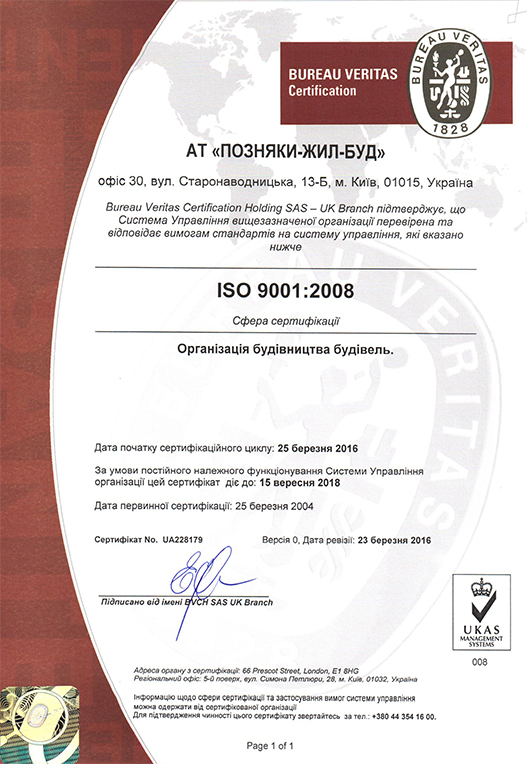 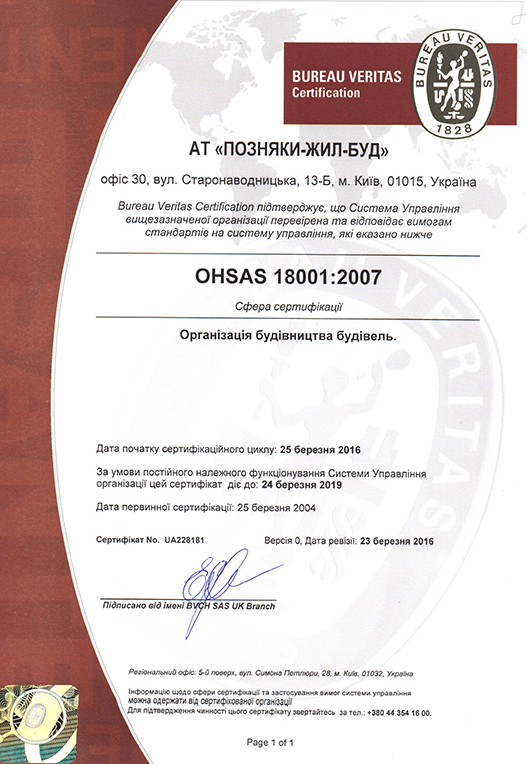 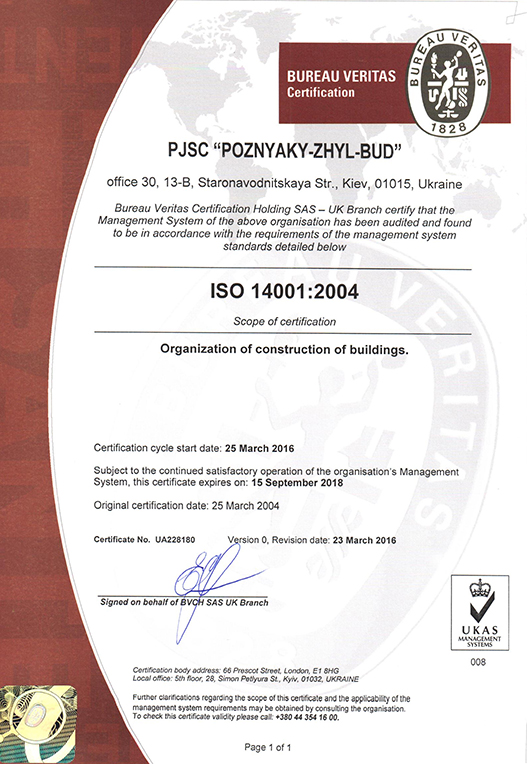